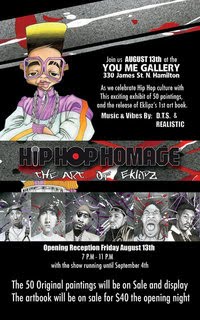 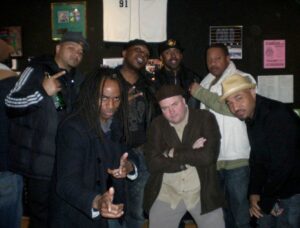 T-DOT PIONEERS EXHIBIT – An interactive community timeline designed to engage members of the hip hop community in documenting their own histories and to identify the Pioneers in Toronto and Canadian Hip-Hop.

The exhibit featured items from the birth of Toronto Hip-Hop including old photographs, posters, vinyl, and awards.

Featured at the exhibit and prominently displayed was the Get Loose Crew album (photo: DJ Jel (chris jackson) with Get Loose Crew Album T-Dot Pioneers Exhibit) and the 1991 JUNO won by (GLC alum) Carl Badwa (aka MC B, aka Carlito) in his solo undertaking as B-Kool with Simply Majestic. 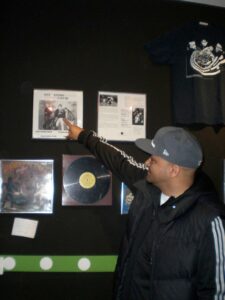 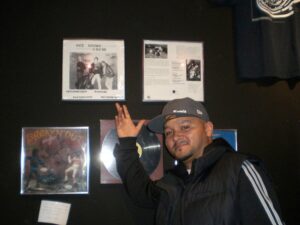 This was the first time in over a decade that Get Loose Crew members had come together. They gave interviews with the local media providing perspectives on a lost generation of Hip-Hop and confirming roots in a rich local music culture dating back to the early 1980s. 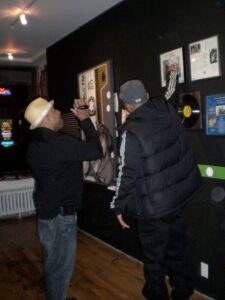 Dr. Campbell: “The title of the exhibition Tdot Pioneers is taken from a kneedeep record from the 1990’s. Here is the logo I just stumbled upon this one day and I was wondering what do you think constitutes a T-Dot Pioneer and why should the next generation bother with even asking these questions?”

DJ Mastermind: “A “T-Dot Pioneer” is someone who in some way big or small made a contribution to help shape the current atmosphere of Hip-Hop culture in Toronto (and Canada on a whole). It could be a breaker or a dancer, a DJ, an MC, radio host, a manager, etc.”