Interview by Ph.D. candidate and former Vancouver CiTR 101.9 FM Hip Hop DJ Niel Scobie into Shadow’s participation as a member of the Get Loose Crew and his contributions as an artist in the Canadian Hip Hop scene. The contributions by Shadow are expected to be documented in Scobie’s work “Systems of Remembering: Toronto’s Hip-Hop Scene, 1979-89.”  for his dissertation in the years to come.

Further ingratiating the Get Loose Crew as historical contributors in Canadian Hip-Hop and the country’s music industry, Scobie revealed during the interview that the Get Loose Crew record was a prominent feature (along with artist Michie Mee) during his Hip Hop Radio program “In Effect” on CITR FM radio in Vancouver in the late 1980’s. A copy of the tear sheet or documented play list dated Thursday June 22, 1989 Showtime from 1:15 3:00 by Host: Niel Scobie was posted on his social media platform. See it here: CiTR 101.9 FM Playsheet Page #1 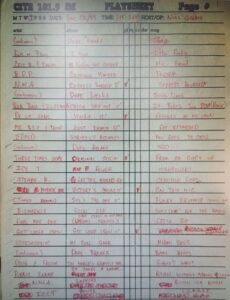 June 22, 2018 – Scobie laments on his Facebook account “29 years ago today, “In Effect,” one of the earliest examples of hiphop radio in Canada aired on CiTR 101.9, UBC. I travelled 7 hours round trip to play an hour 45 minutes of uncut hiphop, the only show of its kind in the city. But that’s what you do when you’re a hungry 17 year old rap fiend.”

PhD Candidate and part-time instructor in Media Studies and a sessional instructor at the University of Guelph’s School of Fine Art and Music. Holder of an MA from Carleton University in Music and Culture and a BA (with distinction) from Vancouver Island University in Digital Media Studies. His goal is to teach Media Studies at the post-secondary level as well as media awareness to elementary and high school students and teaching Popular Music Studies with a concentration on hip-hop culture.

2019. “Translocality and the Articulation of a Jamaican/Canadian Identity in the Music of Michie Mee.” In The Spaces and Places of Canadian Popular Culture. Edited by Victoria Kannen and Neil Shyminsky. Toronto: Canadian Scholars Press.