Nardwuar “the human serviette” talkin’ Hip Hop history with the Godfather of Canadian Hip Hop Maestro Fresh Wes where he confirms the history of the Get Loose Crew. Interview (June 27, 2008)

Legendary Canadian interviewer and musician Nardwuar (John Ruskin) has been an enthusiastic voice confirming and validating the status of the Get Loose Crew and their accomplishment within the Hip-Hop music industry for years. 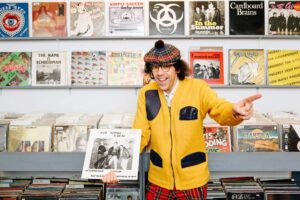 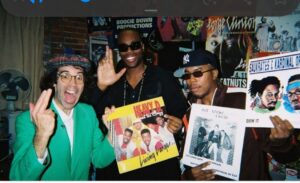 For the last 30 years, Canadian institution and punk rock journalist he has entertained music fans with his inimitable exuberant style of grilling interviewees with the most frighteningly thorough research. Known for giving rare gifts and his “doot doola doot doo” catchphrase, he’s interviewed everyone from Nirvana and Iggy Pop to Jay-Z and Jean Chrétien.

During interviews with Canada’s most significant and accomplished Hip-Hop artists, he has consistently sought confirmation and recognition for the Get Loose Crew by presenting interviewees with a copy of the record and quizzing them to confirm and acknowledge the groups achievements.

In an interview with Maestro Fresh Wes (2008), credited as the Godfather of Canadian Hip-Hop, Nardwuar asks:

Nardwuar: “Is this the first Hip Hop record to come out of Canada?” ”Is this before you?”

Maestro Fresh Wes: “Yo, definitely this came out before me.”

He confirms the accomplishment by remarking: “Yeah, this is big right here.”

Consistent support for the group has included online posts with members of the group on Twitter and on his Facebook account proclaiming “Nardwuar holding the first rap record to come out of Canada in 1988! It’s by The Get Loose Crew!” as well as posing with the groups record in an article featuring him in a NOW Magazine interview.

In addition to the Maestro interview, he quizzed Kardinal Offishall (November 18, 2005 interview) credited as Canada’s Hip-Hop Ambassador where Nardwuar queries him, proclaiming their notable achievement in the Canadian Hip-Hop and Music Industry.